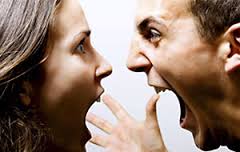 We live in a society that says it’s okay to be angry; it’s even revered through our media.

We exist in a culture, which believes there is an entitlement to be angry when someone else acts, speaks or believes something we don’t want them to from our position.

When a relationship hits some bumps or our partner does something out of the “norm” we get angry. We think they owe us an explanation for this disappointment. We think it’s about us, and we personalize it, turning it into our cross to bear.

We wait for someone to change, we wait for them to act in a way, which we desire and we get angry at them when they continue to be just as they are, because we gave our power to them.

We give our power to anger, it doesn’t give us power. It places us in a state of dissatisfaction over the desire for something to change, which isn’t doing so in the direction of our fulfillment.

Cry me a river?

We’ve a case of misdirected anger.

First off, the focus of anger has nothing to do with another person. In actuality, we’re angry with ourselves. We’re angry at what we allowed—what we manufactured in our mind as the ‘right way’ or ‘only way’ and we’re pissed that we didn’t get our outcome.

Second, it’s all about us and our inability to deal with disappointment. We think our mate should be on the same page with us. They may have stated they were on board in the past or even moments ago, but their actions don’t align with their words; we get pissed at the outcome.

Third, anger is pain—pain we want someone else to fix. And when we are focused on anger, we turn it inwards. We create more pain by beating ourselves up for being stupid, trusting or anything, which we feel could’ve prevented the current circumstances.

Fourth, it’s a vicious circle. We find we get angry at the same things over and over. The more extreme our response in anger, the more its roots are embedded in a long-ago past.

What can we do to stop creating this boiling pot of anger spilling over within us?

The shining light of awareness needs to be displayed inside of us. Why do we give our power away to people and live in the fantasy of an expectation? We learned early on that this was the way to get what we want. Wait for others to show up how we want them to and get angry when they don’t!

It’s time to gain clarity on the reasons behind this belief. Once we know, we can stop waiting and start living.

Unplug the denial. Whatever we’re doing to distract ourselves from the real pain inside, we need to stop. We need to deal with our feelings and become connected to why we operate the way we do. Why do we believe someone owes us happiness, pleasure, or anything? We have to give it to ourselves first. When we give to ourselves we start to see people as human beings.

Last time I checked, us humans were a pretty flawed bunch and most of us are doing the best we can, even if it means we disappoint others.

The inner and outer critics need to find a new hobby. When we’re angry, we usually like justification. We get validation from people around us and from that judge inside, which tells us we’re right and the other person is wrong.

And sometimes we may not be angry, but we ask enough people their opinion about an issue we’re having with our mate and then we get fired up! We start to kick ourselves for allowing the issue. It’s a vicious circle.

Be kind. Listen to the inner critic who’s trying to protect us. Thank it. And do number four.

Jump back and kiss ourselves is the way to go! When we’re in our head, holding anger so tightly as though it’s a weapon…it’s time to physically drop our awareness into our heart and ask what it wants. It’ll shift us out of anger.

Whenever we’re in the throws of reacting, stopping and asking ourselves what we truly want in our heart gives us a different response. The heart doesn’t want to win, it has nothing to prove. It’s all about love. It wants us to embody it internally and externally. The more we allow that vulnerability to surface the more we become fulfilled, happy and at peace.

Love isn’t the drug, it’s the real cure for the pain.

You can also read this post on elephant journal too.

One thought on “Anger is the Drug, Love is the Cure!”